I really enjoyed Less Dead and plan to download the next book in the series. Though I tend to read mostly fantasy, I’m also a fan of noirs that have flawed, interesting female main characters. Some of my favorite mystery authors are JA Konrath, Alan Bradley, Edward Fallon, and Ann Voss Peterson.  Laura Elvebak is a worthy addition to this list.

The book begins as many in this genre do, with the victim, Peter Belton. Jade, a runaway wakes up beside this corpse and can’t remember how she got there. Worst, she fears she may have killed him. I found the beginning very well-written, but truly was caught hook, line and sinker when the main character, Niki Alexander is introduced. Niki is a flawed hero, ex-cop who now works as a counselor in a teen shelter, a career she pursued out of a sense of guilt and a driving need to help. Niki has the perfect character cocktail of vulnerability, toughness, focus, and a deep caring for others. The minor characters are diverse and well-defined, and add much to the story. I was especially curious about Rube and Jade. I hope they both return in the sequel. The characters are complex and believable.

The dead bodies pile up, all of them runaways except for Peter, a councilman. Niki works with her ex-partner to hunt down the killer and find Jade, who she suspects may have fallen victim to the culprit. I suspected the killer fairly early, but there were enough red herrings to keep me guessing until the end.

I have lived in Houston and am familiar with the Montrose area. Elvebak’s description truly captured the place. I strongly recommend this book. So…what did you think? Since I was 22 years old, I’ve lived solely with males. First my husband, then my two boys. Even the two cats are males. When our romance came out in February, I wasn’t waiting with bated breath for them to read it. Figured I’d pass out if I did. So to say I was surprised when they all did, (well, okay, the cats didn’t), is an understatement. Not only did they finish it, but they liked it too. (And trust me, if they didn’t, they would have zero problem letting me know.) Not only that, but they were pretty darn good about figuring out which parts I wrote and which Minette did. Half the time I can’t remember who wrote what when we edit.

I often hear from girlfriends about the lengthy, deep, illuminating talks they have with their daughters. All day girly outings like going to the spa for manis and pedis then lunch and a movie…that sort of thing. I don’t know if this is true for all mothers of boys, but those kind of marathon talks just don’t occur often for me. I’ve found that during snatched moments, like on a drive to the mall or while watching a rerun, they will open up to me. I cherish those moments. The thing I didn’t realize and that I do now is, while they shared their lives with me, I shared of myself too. And I guess those moments were special to them too, because they really know me.

Review of Angels by Matthew Storm 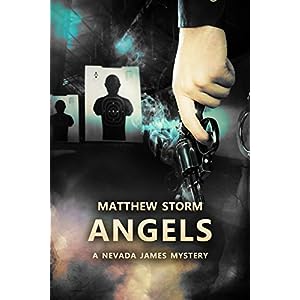 First off, I strongly recommend reading the first two books in the series. Getting to know the main character, Nevada, as she evolves is a real treat. I fully admit, I am a sucker for the flawed hero, that character who has been knocked down so hard that it’s difficult, almost impossible, to bounce back. Taking all these lumps has a large role in defining such characters’ personalities.

I have eagerly awaiting book three in this series and was not disappointed. (Though a shorter wait would be much appreciated for book #4 *gently nudges author*.) In this book, one of Nevada’s informants tries to reach her and is murder before she can tell Nevada her news.  As she attempts to solve her newest case, she finds more than she bargained for and some life-altering news. I loved the crossover and the twists and turns in the tale and can’t wait for the next installation. I participated in a competition and won this beautiful coloring book. Not being a person to meditate or go to yoga classes, coloring is a wonderful way for me to relax and regain a sense of peace that in this day, can be hard to find. The illustrations are so detailed and attractive that I can easily see myself framing one or more of the finished pieces to display. The paper is perfect for the use of colored pencils which is my preference because I find it is easier to blend the colors and you can color portions as dark or as light as you wish. I recommend this book as a wonderful gift, be it for a loved one or for yourself. Modern day Knights of the Round Table protect the world from monsters. Dave Carter was one such knight, but turned his back on this life after surviving being captured and tortured at length by vampires. Carter takes up his sword once more when a vampire war threatens. Though there were times I shook my head over the main character’s actions, I did like the tale. Having already read the second book of the series and enjoyed it even more, I recommend giving it a chance.