She thought after she moved to the island, all her troubles, both magical and mundane, would be over.

Acceptance on the Shrouded Isle is hard earned.

Becca Shaw has put down roots in Scotland with her two daughters, but even with her roles as Keeper of the forest, witch-in-training, and family peacemaker when relatives visit from the States, she still feels like an outsider.

Greg Gillie has been isolated in the forest as the only Keeper for so long. With Becca’s help, when she’s not appeasing her visitors, he integrates more into society even as outside forces loom to disturb the island’s peace.

Can the Keepers discover what’s causing mischief before it’s too late?

The disgruntled villagers at the heart of the pranks want answers, and it’s up to the Keepers and their found family to figure out what, or who, wants to disrupt their world.

Bagpipes and Basil, the second book in the Shrouded Isle series, is filled with mysterious twists and turns with touches of sweet romance that leaves you guessing to the end. This book is a cozy fantasy with generous doses of humor about a family, a courtship, and a community. 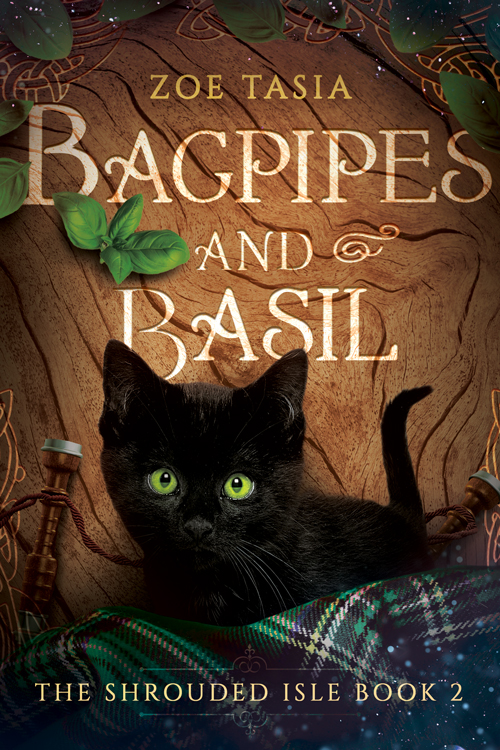 Praise for Bagpipes and Basil

“The second book in the Shrouded Isle series provides another satisfying blend of romance and intrigue with a Scottish flair that will leave readers with more than a light taste of the fair isles.”

“This cozy fantasy involving fae, witches, and a forest deity analog pulls from familiar tropes, but makes them its own. . . . As readers experience the novel through [Becca’s] eyes, they will be pleased with her diverse relationships, from romantic and filial love, to more adversarial, suspicious neighbors.”